I‘m often asked about my favorite episode of GI and I do have a couple of favorites. My first choice would be  “And Then There Were None“, where I played a Cockney girl in the dream sequence. It was always fun to play another character, and doing the accent was a bonus. Another favorite was the Sherlock Holmes-Dracula episode (“Up at Bat“). I loved being the old hag.

Also it was fun being hit on the head and imagining I was Ginger in one episode (“The Second Ginger Grant“). Tina was a great sport to allow me to mimic her voice. That experience also came in handy several years later when I got to furnish the voices of both Mary Ann and Ginger in the “Gilligan’s Planet” cartoon series.

These photos are from the Cinderella episode, one of my favorites and one of Natalie’s best. Alan played a court knave as well as the wicked stepmother, while Tina and I played the really ugly stepsisters. 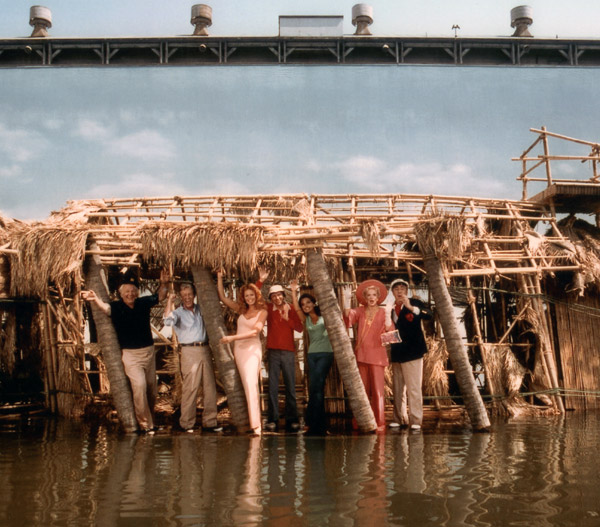 We had no trouble after twelve years away from the show with beginning again. It was almost as if we stopped on Friday and started again on Monday.

It was a wonderful feeling because we never really had a chance to say good-bye when the original series ended. Sherwood Schwartz was terrific, and he got as many of the old crew together as possible to work on the movie. The rescue scene – coming into the marina with thousands of fans cheering us on from the docks – seemed almost real. We all got tears in our eyes. It was a truly wonderful moment!

While filming “The Harlem Globetrotters on Gilligan’s Island“, it was difficult to find cheerleader outfits that would look good on all four women, so we only had one outfit each. We were told by the wardrobe designers not to eat, drink or do anything while in these costumes.

I was sitting in my chair, drinking coffee when one of the Globetrotters came up behind me and asked for an autograph. I put the styrofoam cup between my teeth as I took the pen and paper to sign my autograph. When I finished writing, I said, “Here,” and tilted my head back with the coffee cup in my teeth as I handed him the autograph over my shoulder. As I leaned back, the coffee spilled from the cup and ran down the front of my costume.

They had to take me into the washroom and wash me and the costume, then try to dry me off with a hair dryer so I wouldn’t hold up filming. Talk about embarrassed! Of course, if I wanted to do that again as a comedy bit, I’d never be able to repeat it, I’m sure.

Here you’ll find selected photos from my personal collection that you can buy – reprinted and signed by me. Browse All My Photos

SITE AND CONTENTS ARE COPYRIGHT © 2018 DAWNWELLS.COM